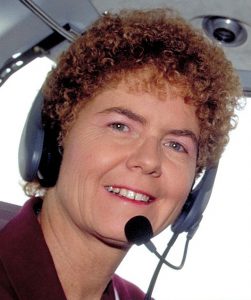 August 24, 2018,  ANAHEIM, Calif. – Martha King, co-chair and co-owner of a major E-learning-focused aviation school, has been appointed to Civil Air Patrol’s Board of Governors.

“The Civil Air Patrol has a long and storied history, and represents the biggest and most committed group of volunteers in aviation,” King said. “It’s an honor to be associated with this wonderful group of contributors.”

San Diego-based King Schools Inc., which King founded in 1975 with her husband, John King, develops and provides online courses for individuals interested in achieving all levels of pilot certification.

The Kings, both certificated flight instructors, launched King Schools as a traveling ground school that conducted two-day courses in various cities. About 10 years later they created training videos for other flight instructors’ use in presenting their courses. They subsequently moved to online training.

King and her husband were inducted into the International Air & Space Hall of Fame at the San Diego Air & Space Museum in 2006.

In 2003, she was honored by the First Flight Centennial Commission as one of the 100 Distinguished Aviation Heroes in the first century of flight and was also named as one of the “100 Most Influential Women in Aviation” by Women in Aviation International. Two years later, she received the National Aeronautic Association’s “Cliff Henderson Award for Achievement,” annually presented to “a living individual or group whose vision, leadership or skill has made a significant and lasting contribution to the promotion and advancement of aviation or space activity.”

In recent years the Kings were jointly:

“Martha King has an excellent reputation as an industry leader in innovative approaches to pilot training, and we’re all delighted to welcome her to CAP’s Board of Governors. The vision and experience she brings to our governing body are especially valuable as we increase our emphasis on flight training for our youth in response to the nation’s ongoing pilot shortage,” said Maj. Gen. Mark Smith, CAP national commander.

As Civil Air Patrol’s top governing body, the 11-member Board of Governors consists of four Air Force appointees, three members appointed jointly by the Secretary of the Air Force and CAP’s national commander, and four members-at-large — including Peterson and King — selected by CAP’s Senior Advisory Group to represent industry, government and education.

The Board of Governors moves CAP forward through collective decision-making to generate strategic policies, plans and programs designed to guide it both today and tomorrow. It is assisted by CAP’s national commander and CEO, the organization’s chief operating officer and the CAP-U.S. Air Force commander, who act as advisers.

Civil Air Patrol, the longtime all-volunteer U.S. Air Force auxiliary, is the newest member of the Air Force’s Total Force. In this role, CAP operates a fleet of 560 aircraft, performs about 90 percent of continental U.S. inland search and rescue missions as tasked by the Air Force Rescue Coordination Center and is credited by the AFRCC with saving an average of 80 lives annually. CAP’s 60,000 members also perform homeland security, disaster relief and drug interdiction missions at the request of federal, state and local agencies. CAP also plays a leading role in aerospace/STEM education, and its members serve as mentors to over 25,000 young people participating in CAP’s Cadet Programs. Visit www.GoCivilAirPatrol.com or www.CAP.news for more information.