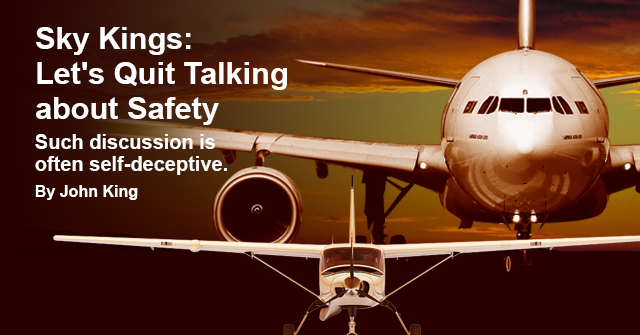 “There can be no compromise with safety.” “Safety is our number one priority.” You hear these kinds of quotes all the time from well-meaning people—very often people like the Secretary of Transportation or the Administrator of the FAA. The assertions are meant to be comforting, and they are—especially after a crash. They assure the public of the firm resolve by people in power to do better. The problem is they aren’t, and can’t be, true.

You can’t start an engine without compromising safety. If safety were our number one priority, we’d never move an airplane. Clearly going somewhere is in itself a demonstration that moving the airplane ranks ahead of safety. It would always be safer to stay put. These little intellectual dishonesties tend to end discussion and substitute for genuine analysis on the subject.

It can be discomforting to talk openly and honestly about safety. So we often make false assurances and otherwise deceive ourselves. For instance, we usually talk about safety as if it were an absolute. But absolute safety is an impossibility. In reality, safety is relative. Every activity has a greater or lesser degree of risk associated with it. Still, when someone departs on a trip, we usually say, “Have a safe trip” as a polite expression of goodwill. We say this when we know having a genuinely safe trip is literally impossible.

Not only do we find it uncomfortable to admit to ourselves that we can never achieve absolute safety, but we sometimes utterly lie to ourselves in order to not have to face reality about safety. General aviation pilots used to frequently tell themselves, and their passengers, that the drive to the airport was the most dangerous part of the trip. They wanted to believe that flying their piston-engine general aviation airplane was safer than driving. When it became known that the fatality rate per mile in a general aviation airplane was seven times that of driving, they had a very hard time accepting that reality. (On the other hand, for various reasons travel on the airlines is in fact seven times safer than travel on the roads.)

Sometimes our self-deception on the subject of safety just reflects wishful thinking. After a series of commuter airline crashes, the Administrator of the FAA attempted to mandate one level of safety for little airplanes as well as big airplanes. The problem is that it is not possible for a small airplane to be as safe as a Boeing 747. Safety equipment is adds weight. A little airplane can’t carry the weight of the safety provisions of a 747. Plus, safety is expensive. A little airplane can’t afford the cost of safety equipment the way a bigger plane can. But who wants to tell that to someone about to fly in a smaller airplane?

On the other hand, when noted Australian thought-leader and avid pilot (weight-shift trikes, single-engine airplanes, helicopters, and jets) Dick Smith was Chairman of the Australian Civil Aviation Safety Authority, he steered people away from disingenuous talk about safety. He shocked people by talking about “affordable safety.” His point was that when safety becomes too expensive there can be a net reduction in safety. When excessively expensive safety measures are mandated, the cost of flying goes up. At some point people take less-safe surface transportation instead, and fatalities go up.

Another problem with the way we talk about safety has to do with how safety advice is normally given. It often provides very inadequate guidance. Safety advice usually takes a negative approach, stating what you cannot do rather than focusing on positive things you should do. In many cases it is limited to a hodgepodge of rules and sayings. The rules and sayings may all be good, but they are not adequate, because they fail to provide the big picture and structure.

Moreover, safety advice can even generate resistance. It can be preachy—taking on an off-putting air of smugness and superiority. It is not uncommon for advisors to suggest that someone does not exercise proper “judgment” or “aeronautical decision-making.” This comes across as a vague, demeaning criticism, but once again, with very little guidance.

So what is the alternative?

We need to change our vocabulary. In nearly every case, it is more insightful and helpful to talk about risk management. The concept of risk management suggests a proactive habit of identifying risks, assessing them, and exploring mitigation strategies for them. Those words “risk management” provide much-needed guidance about what people should do to get a safer outcome, in a way that the condescending criticisms, and emphasis on “safety,” do not.

One of the problems about the way we sometimes use the word “safety” is that if someone wants something done a certain way, they can often just simply trot out the word “safety,” or for that matter, “security,” and get carte blanche with little analysis. But the words “risk management” require a more thoughtful discussion—including in most cases identification and assessment of the risks and the appropriateness of the mitigation strategies.

When an aviation tragedy occurs, rather than trying to reassure and comfort people by promising things that are not possible, aviation leaders should say, “Our job is to understand the risk management failures that allowed this to happen and see that they do not occur again.”

Much to their credit, the FAA’s Flight Standards Service has embraced “risked-based decision-making” as one of its core values. The idea is that in this business of creating rules about how aviation should be run, they will now think in terms of the risks of an activity. Every safety measure has a trade-off in loss of fun and utility. When risked-based decision-making is a core value, that trade-off will be taken into consideration during rule-making.

The good news is that much of the aviation community is now focused on “risk management” rather than “safety.” First, flight schools are moving towards scenario-based training in order to help pilots learn risk management. The idea is to give a learning pilot the tools to habitually identify, assess, and mitigate risk. Then when that pilot is evaluated during the practical test, the FAA’s new Airman Certification Standards (ACS) require their risk management to be evaluated in every area of operation.

Martha and I have been promoting straight talk about safety for years. We finally figured we must be making progress when an attendee came up to us after a talk and said, “Have a relatively safe trip home.”

NOT LOST NEAR AS MUCH AS WE USED TO BE

NOT YOUR FATHER’S COMMERCIAL CERTIFICATE